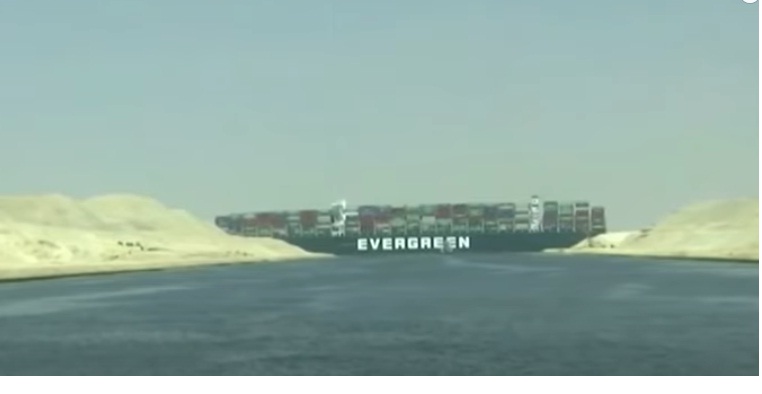 Today’s News. Allocation of $650 billion for global recovery. Among the most important news, we will talk about the Suez Canal, the economy and other topics.

Today´s News. Washington, 24 Mar.- The managing director of the International Monetary Fund (IMF), Kristalina Georgieva, said Tuesday. It was a statement supporting a possible new allocation of $650 billion Special Giro Rights to support the global recovery of the coronavirus pandemic.

“I intend to submit a formal proposal to the Executive Board before June to consider a new allocation of $650 billion, based on an assessment of the long-term global reserve needs of IMF member countries, and consistent with the IMF’s Constitutional Convention and mandate”,

Today’s News. A ship got stuck in the Suez Canal and blocked maritime trade between Europe and South Asia. The Ever Given, 59 meters wide and 400 meters long, is one of the largest container carriers in the world. Bound for Rotterdam, it ran aground on the Canal coast horizontally, so dozens of boats on both sides cannot sail

An unreleased situation took place in the Suez Canal. One of the world’s largest container ships got stuck on the shores of the site and, despite several refloating attempts, was unable to rotate. Thus, on the outskirts of the Suez Canal there are hundreds of ships roaming the Red Sea and the Mediterranean. They are waiting for the inconvenience to be resolved, and maritime trade between Europe and South Asia is halted.

The largest freighter in the world.

The 59-metre-wide, 400-metre-long Ever Given freighter with a gross tonnage of 219,079 tons was heading to the port of Rotterdam. It was heading to the Netherlands, from China’s Yantian district. He had already crossed Taipei and Malaysia, and was scheduled to arrive at the port of the Netherlands on 31 March. However, it has been staying on the Suez Canal for several hours since arriving in the region last night.

According to Sputnik, Egypt has already made numerous attempts to get the Panamanian-flag ship out of its jam. A photo uploaded to Instagram shows a small excavator trying to pull the bow off the boat from the sandy shore. The ship’s tracking data shows about a dozen tugboats trying to push it into deeper waters.

The Suez Canal is the only way to get from the Mediterranean Sea to the Red Sea and the Indian Ocean. According to Vessel Finder, a platform that follows marine traffic,   there’s a huge traffic jam unfolding at both ends of the 120-mile-long canal. Dozens of boats are waiting to enter.

Ultimately, the time Ever Given will remain stuck now depends on how far-fetched it is and what the tides do. This is something which, at the southern end, can have a range of up to 1.9 meters. Given the enormous importance of the waterway to world trade, the ship’s fate should be known soon.

The Dutch company in charge of the rescue waits for the tide to reach its highest level, something that will not happen until March 31. Another option, although it would take more work, is to lighten cargo on the ship.

At the moment there are about 150 locked boats waiting for a solution. In this scenario, companies plan to change the route through the Cape of Good Hope.

3. Economic recovery in the U.S.

Today’s News. U.S. Federal Reserve (Fed) Chairman Jerome Powell said today that the country’s recovery is “faster than expected.” It also “appears to be strengthening,” commenting on the economic outlook in the world’s first economy as the Covid-19 vaccination process progresses.

The recovery has progressed faster than was generally expected and appears to be strengthening. Powell said in his virtual appearance before the House Financial Services Committee with Treasury Secretary Janet Yellen. However, he warned that such a recovery is “far from complete” so the central bank will continue to “offer the economy the support it needs for as long as it takes.”

Yellen, for his part, stressed the importance of the recently approved $1.9 trillion ($1.5 trillion) fiscal bailout package and noted that the US can return “to the plenary in 2022.”

Last week, the Fed raised economic growth forecasts for the United States to 6.5% by 2021, up from 4.2% projected at the end of 2020, following the approval of the ambitious fiscal stimulus package by Congress.

Today’s news. 26 Mar 2021 12:49 GMT.  The transport container crisis threatens to leave consumers without toilet paper again. Average freight price of a container on eight main routes has grown more than twice since the start of the coronavirus pandemic.

Normally, the pulp is sent as a fractional load. However, the demand for container carriers is also beginning to spread to bulk ships. As a result, the company is at risk of deferring some deliveries, Schalka said.

“All South American competitors exporting fractional cargo have faced this risk,” he said.

The global container crisis has been unfolding since the start of the coronavirus pandemic. Thus, the Drewry World Container Index, which reflects the average freight price of a 40-foot container on the eight major shipping routes, has grown. It pass from less than $1,500 to $4,871 since November 2019. One of the causes of this trend is the decline in the production of new containers, which slowed down in 2020. This lower rate is smaller than the scrapping of the old, the logistics company Hillebrand collects.

Latin America is one of the regions of the world most affected by the crisis. “Prepandemia we had freight of $1,500 to $2,000 from Asia to Latin America, but we’ve reached rates of $10,000. In my 15 years of experience in logistics I had never seen it, ” the magazine América Economía quotes Felipe Astudillo. He is vice president of the Importers Committee of the Chamber of Commerce of Santiago (Chile).

He points out that if it were not for Brazil, freight would cost even more. “We in South America are affected because we are a lower priority. The relative weight we have with transport companies is very low. If Brazil didn’t exist, I don’t know if ships would arrive in South America.”

The Port of Miami team attributes the strong performance of the cargo to a strong balance of world trade and more than $1 billion of complete improvements in capital infrastructure. This offers loaders a deep-water gateway that is equipped at -50/52 feet to handle large boats. To date, the Port has hosted more than 420 post-Panamax ships that have been convened due to the completion of the Deep Dredge project.

In addition to that, the acquisition of new super post-Panamax zero emissions electrified cranes, the rail freight link that provides a link to the national rail system. Finally, a port tunnel connecting with the highway to and from Port of Miami.

Taken from: Port of Miami-cargo-activity.asp

On the other hand, it offers the benefits of resistant technology: fall resistance up to 1.8 meters, built-in water and dust resistance, a visible screen in sunlight and a glove-compatible touch screen. All these features make it suitable for use in a warehouse environment, last mile delivery or supply chain management.

The use of devices such as TOUGHBOOK M1 Real Sense TM can not only bring greater efficiency, process optimization and human error reduction, but can generate great savings in Total Cost of Ownership.

The 10 most important seaports in the world.

But the dominance of Chinese ports is no surprise given the economic power of the Asian giant.

China is not only home to the world’s largest port, but also hosts half of the world’s top 20 ports.

TEUs managed in 2018: 42.01 million. The port of Shanghai has been the most active port in the world since it dethroned singapore Port from the top of the rankings in 2010. Shanghai Port also hosts the world’s largest automated terminal, Shanghai Yangshan Deep Water Port, which began operations in late 2017.

TEUs managed in 2018: 36.60 million. Today, the port of Singapore offers connections to more than 600 ports in 123 countries on 6 continents, with 130,000 ships passing through its docks each year. It is also the largest transshipment port in the world, hosting about 20% of the world’s containers.

TEUs managed in 2018: 27.74 million. Thanks to the technological evolution of the area, there are many companies that have settled there, including Huawei, Tencent and SenseTime.  Shenzhen is now a global technology hub and often known as China’s Silicon Valley.

TEUs managed in 2018: 26.35 million. Today, the port is known for the capacity of its infrastructures, including a large terminal where up to 250,000 tons of oil can be managed and a mineral loading dock with capacity for more than 200,000 tons.

TEUs managed  in 2018: 21.87 million. Its deep-water port, Nansha, is responsible for more than 70% of the total volume of containers in Guangzhou port.

TEUs managed in 2018: 21.66 million. Busan is also the third largest transshipment port. In 2018, it managed 11.46 million EUs in transshipments, representing 11.5% growth over the previous year.

TEUs managed in 2018: 18.26 million. Established in 1892, Qingdao Port consists of four different port areas: Dagang, Qianwan, Guangdong and Dongjiakou. It is considered one of the most important ports in the world on the Western Pacific route.

TEUs managed in 2018: 16 million. Tianjin Port is located just 150 kilometers from Beijing and is often considered as the maritime entrance to the Chinese capital.

TEUs managed in 2018: 14.95 million. The port of Jebel Ali in Dubai closes the top 10 of the ranking of the world’s major ports, although it did not start its activity until 1979, much later than its opponents. Not only is it the most important port in the Middle East, but Jebel Ali is also the largest man-made port.